[Warning: The following post is technology-filled and totally about me. I mean, even more about me than normal. Really. You’ve been warned.]

The beginning of 2009 has been almost completely about software for me. I am in the middle of editing the video for last month’s Gospel According to Scrooge. This is a time-consuming project for a couple of reasons.

We shot video from four cameras on two different nights (Sunday and Monday). That means there was 16 hours of video to import and work with.[1] On top of that, I’m not experienced with video editing, nor with the editing software. Most of my video editing experience has come from the last few years of editing the Scrooge video.

During that experience I have been using Apple’s Final Cut software. Because of some software and operating system issues, I was forced to upgrade[2] to the latest version, Final Cut Studio 2

. It’s very powerful software with many cool and wonderful features. That’s what makes software powerful – cool, easy-to-use features, that give great depth and complexity to what you can accomplish. It also means there is a lot to learn. So, I’m learning.

One of our choices[3] this year in Scrooge was to use some pre-recorded video as part of the production. We used four different video segments this year: the opening montage, taking us from the opening titles to the opening song; the bedroom sequence, which shows Scrooge entering the bedroom, undressing, hearing the voice, then encountering Angel #1; the graveyard, with the Cratchit Family; and the final bedroom scene, where Scrooge discovers he is still alive. In order to accomplish some of the effects used in these segments, I used a trial version of Adobe After Effects CS4

. After Effects is widely used by video professionals, but I had never used it. I quickly had to learn some key features in order to have the video ready for Scrooge. But, as I said, it was a trial version, so I had to purchase the full version in order to finish the edit of the DVD.

, which includes After Effects. Again, it’s another powerful program with many wonderful features. More learning.

Both of these programs are more than one program. They are suites that include several programs, each with many parts and pieces.

With so much to learn, I’ve turned to a some internet sources for instruction and help. The first is MacBreak Studio, a podcast from Pixel Corps. These are short video podcasts that cover one specific feature for video producers in each show. Usually these are features specific to Final Cut Studio. Some of these shows originated in Pixel Corps’ original podcast, MacBreak.

Another great podcast is ChurchMediaDesign, or CMD, from the media guys at Watermark church from Grand Haven, Michigan. This is a phenomenal show that gives a lot of great how-to’s. (They also give some free resources to use in your own ministry.)

After I wrote the previous paragraph, it got me thinking, so I searched iTunes and – duh – it turns out that Creative Cow has a range of podcasts covering the range of both Adobe and Apple products. I’ll have to check them out when I’m done posting this.

I’m also exploring Lynda.com. It has a tremendous amount of video tutorials on all of this software and more. Unfortunately, it’s not free. However, it’s not that expensive, and they have a trial period.

Although it’s not theologically correct, it does bring to mind something I often quote from my dad…

Die and forget it all.

I hope to work on the first part…and delay the second part for awhile.
————————————————
[1] Okay, not exactly 16 hours. One camera didn’t film the first act on Sunday. Very disappointing. But the import of the video was only the beginning. Two cameras shot in LP mode, which our JVC was unable to replay. I didn’t discover why until after I spent most of one day trying to use the JVC. Editing will mean going through all of the captured video frame-by-frame.
[2] When I say “upgrade” or “bought”, I mean that I did it on behalf of Faith Assembly. This software is more than I can personally afford. Although the upgrade to FC is cheaper than the full version, and, since I’m a homeschool dad, I can get the education version of CS4.
[3] And when I say “our choice”, I mean “my choice.” Yes, I asked the opinion of everyone in the leadership team of Scrooge, including Pastor Goss. Those that liked the result can thank them for their decision. But those that didn’t can blame me, since it really came down to me pushing this through. More on that later. 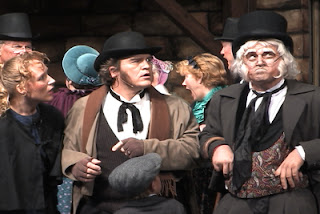 Here’s your first look at the cover shot for the Scrooge 2007 DVD. This is one of several things I’m working on at the moment and one of the reasons that this post is on Tuesday instead of Monday.

You see, yesterday I thought it would be a perfect day to get a post out and start a regular habit of posting every Monday.

Here are the current and upcoming things I’m on right now:

That title is more literal than you might guess. We finished Scrooge on Monday, with mixed results. The cast and crew got better every night, and Sunday was a great crowd, full and very responsive.

Monday was small and “appreciative”. All-in-all, everything went very well.

Now it’s over, and I’ll be spending most of the rest of the month out of the office. Yesterday was full of several errands and about 30 minutes in the office.

Today is the “pooped” part. Our septic tank at the house has backed up. Barry the plumber – a very nice man from church – is currently trying to determine whether there is a clog or if we need our drainfield redone. (“A drainfield for Christmas for me?! Oh, you shouldn’t have!”)

In the meantime, I missed the opportunity yesterday to wish my brother-in-law, Terry, a very happy birthday. So, happy late birthday, TS! 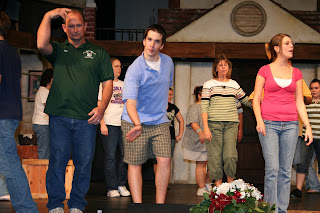 At least, it feels like it’s Scrooge all-day, everyday at the moment. This is the last week of preparation before Friday’s opening night. Monday’s dress rehearsal was over at about 10:30pm. Last night was about an hour shorter. Last night was the first night for everyone in makeup, so that took some getting used to for the new cast members.

Tonight is church, and tomorrow is our final dress rehearsal.

This picture, from last week, made me laugh. Sam and Jeff Kirkland were taking their bows during Whaddaya Say. I was tempted to put it on the Scrooge blog, but I’ll just keep it here for now. 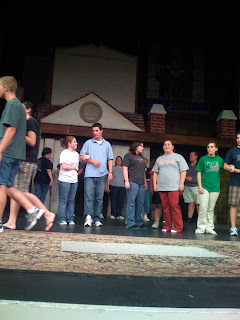 It’s the last 2 weeks of our preparation for the 18th Annual Presentation of the Gospel According to Scrooge at Faith Assembly.

You’d think after 18 years (along with my 3 years of Scrooge in Ocala) this would be getting easier. Nope.

But neither is it less fun. The challenge of getting 120 people on the stage, along with all the stage and technical crews, moving in the same direction is always fun. Not always good fun, but fun anyway.

Here’s a picture from last night during the “Ring the Bells” song. I’ll also be posting this on the Scrooge blog. 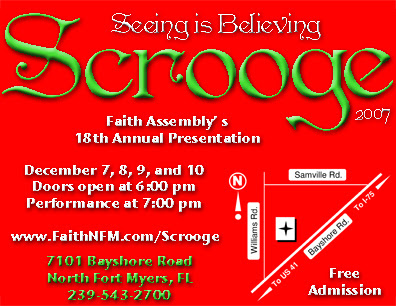 Here is the back of the new Scrooge flyers. Only 7 weeks from tonight. Yikes.

One of the things that kept me busy last week was getting ready for our Scrooge Starter last night. Unbelievably enough, it’s our 18th go-around with the Gospel According to Scrooge. I’ve been working today to get the Scrooge blog functional again. (Some server problems that I won’t go into.) It’s up and running.