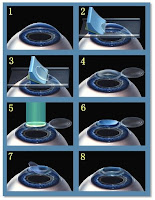 The last week has me thinking about vision, and not in the metaphorical sense that churches and ministers often talk about. You might have seen my Tweets or Facebook status about what has happened, but here’s the whole story.

Several weeks ago – and I won’t get the timing of events before this week exactly right – our friend, Annette, told Trudi about a contest in the newspaper from a local ophthalmologist with a prize of free Lasik surgery. Trudi has talked before about how much she would like to have that done, but it is quite expensive. As much as she would like to have it done, she also loves me [:)] and asked Shae to write a nomination letter to get me into the contest.

They didn’t tell me they were doing this. Here is Shae’s letter:

“My dad has worn corrective lenses since he was a kid. He’s never complained, except for muttering under his breath when he lost his contact on the bathroom floor or when we found a picture of him in his third grade “Harry Potter” look… which is not good, since he was rocking those owl-eyed specs decades before the little wizard ever existed. He’s been a good sport about getting short-changed in the eye department, but when my mom read the blurb in the News-Press about this prize, we both knew we wanted to win for Dad.
So we did a little digging. I’ve never seen my Dad budge without his contacts or his glasses. From the moment he wakes up, he’s wearing something to help him see. I knew his eyes were bad, I just didn’t know how bad until we called his eye doctor. As it turns out, my poor father has 20/400 vision, plus an astigmatism. According to the doctor, without corrective lenses, he can’t see a hand in front of his face. I may be eighteen, but I still haven’t lost the sense of seeing my dad as a superhero who can fix anything, so it was a shock to hear that without those clunky lenses, he would be considered legally blind.

I’m nominating my dad because I love him and because, frankly, he deserves it. He’s been a pastor since 1990. His job is to help others, whether they’re a long-time member of the church or just a visitor passing through. He’s wonderful at his job, but he’s even better as a dad. He gave us his sense of humor, his values on right and wrong, his love of chocolate, and his brown eyes. I love those eyes because they’re his eyes… and mine. He’s done so much for everyone else, so I would love to be able to do this one thing for him. Please pick my father, Reverend Tim McDaniel. Let him ditch those Clark Kent spectacles, so everyone else can see the Superman that we see.” 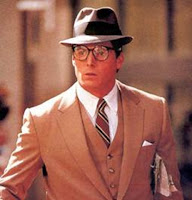 Okay, obviously she stretched it a bit. I’m not Clark Kent, Superman or even Jimmy Olsen. Although, I might be close to Jimmy. However, the part about my eyes is true. Without glasses or contacts, I can’t focus beyond about six inches. Other than that, it kind of sounds like I’m a doddering old guy. Which I might be.

Anyway, the Giving Eyes contest is offered by Collins Vision and Dr. Michael Collins. He is a rather young-looking doctor who specializes in Lasik surgery. Ann, a very nice lady from his office, called in late April to say that I was one of four finalists. She was very excited for us and seemed to be really impressed by Shae’s letter.

The next thing to be done was to be examined, to find out if my eyes were eligible for the Lasik procedure. My appointment was yesterday, May 28. To prepare for the appointment, I had to go for a week without my contacts, wearing only my glasses.

Wearing my glasses is annoying, because they aren’t up to my current prescription, and wearing them is just bothersome anyway, but I was happy to do it, because of the possibility of winning the contest.

At the same time, I went into this without much expectation, not because I didn’t want the prize, or because I doubted that I might win. Recently I was reading Dan Ariely’s book, Predictably Irrational (see the link on my sidebar), and he was talking about how we are prone to acting in certain ways, especially when we take “ownership” of things. There are good results to taking ownership, and there are not-so-good results, especially when we take ownership of things that don’t belong to us. The funny thing is, we can easily take ownership of things ahead of time. That’s the whole basis of advertising, getting the consumer to picture themselves in ownership of what they’re trying to sell.

I didn’t want to “own” a prize that wasn’t mine. As a result, I kept my expectations down. Paradoxically, I fully expected to win. I can’t explain why, other than I thought Shae’s letter was really good and I had been told that the other finalists had been self-nominated.

Yesterday I went to the Collins Vision office, where I was treated very nicely and got to meet Ann, Dr. Collins, and the rest of the office staff. Dr. Collins’ assistant ran several tests on my eyes, and he remarked that I seemed well-qualified for Lasik. 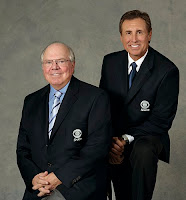 The last thing he did was dilate my eyes and sent me out to the waiting room. As I sat there, a tall man came in and announced himself to the receptionist as Gary Danielson. For those that don’t know, he was quarterback of the Detroit Lions back in 1976-1984, and currently is the lead analyst for CBS Sports’ Southeastern Conference football broadcasts. Both of those things are important to me, since I am a Lions fan since before he was quarterback (Greg Landry) and I really enjoy his commentating (along with Verne Lundquist) on the CBS broadcasts.

How cool, I thought. I wanted to say something, but didn’t really want to bother him, especially since I didn’t have anything particularly interesting to say. In the end, I left him alone, since no one else in the waiting room seemed to know who he was. I did Tweet that he was there, though.

Eventually I went in and met Dr. Collins, who was very nice, and he did further tests on my eyes. These were the most painful. He had to shine very bright lights in my eyes, which with my eyes dilated, was like poking the sun in my eye.

This morning, bright and early, Ann called. I was chosen as the winner! She said the surgery date would be July 10 for what normally would be a $4900 procedure, but will be free to me. This is an advanced Lasik procedure that is $1000 more than their regular Lasik.

The problem is that I am scheduled to leave on July 11 for National Bible Quiz Finals in St. Louis. Ann said she would check with Dr. Collins, because a post-op check-up is necessary. She also mentioned that they had checked online and found my Twitter account. They saw my Tweet about Gary Danielson, which they thought was “cute”, and hoped to get an autograph for me.

Later, she contacted me and we’ve set the date. Unfortunately, my trip has messed up the July date, and surgery is now scheduled for Friday, September 4th. It’s disappointing to wait, but it’ll be great when it’s here.

That’s the story. I’m a winner. I’ll keep you up-to-date here. God is good to me.