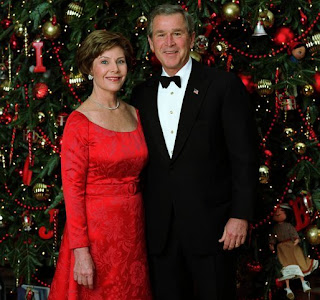 It’s really rather remarkable when you think about it.

The elder President Bush gained access to the White House in 1981 as Vice President. By extension, so did his son, George. For the eight years after, then for four years when his dad was president, George became increasingly familiar with the place.

For the last eight years, it has also been the home of his family, with Laura, their daughters, and their pets.

It must be a strange feeling tonight, the last they will spend as primary occupants. Tomorrow they will leave, and many will be gleeful and rejoice. Enemies – no less a term will do – of President and Mrs. Bush will enthusiastically try to expunge any trace of the former tenants’ presence in the place. They will trumpet “change” and “new hope” and denounce the backward and bumbling steps of those that have gone before.

I will be praying for President and Mrs. Bush. Only Divine Wisdom could tell which steps have been best and which have been faulty in the past eight years. But I am thankful that these great Americans have been leading us. I am thankful for the energy, wisdom, caution, strength, patience, generosity, and goodwill that they have used in serving our country. They have served every person in this country – rich or poor, black or white, conservative or liberal – with dignity, sincerity, and faith in God and our Lord Jesus Christ.

May God bless you and your family in the years ahead.