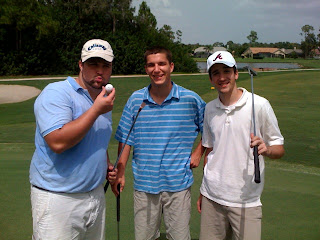 Time to catch up a little with the blog. Sam, Stephen Goss, and Dalton
(Sam's almost-brother), and I went golfing Friday. It was the first
time on a regulation course for Sam and the first time anywhere for
Dalton. They did pretty good for first-timers, shooting a 56 and 57 on
the back nine. Of course, if we had counted their penalty strokes, it
would've been a bit higher. ("Penalty strokes? What's that?" said Sam.)

They lost some balls, but gained some knowledge (you can't ground your
club in a bunker before your shot; it's easier to hit a 3-wood than a
driver; if you lift your head, you might miss the ball), and they
learned that Tiger Woods on the Wii is easier that the real thing.