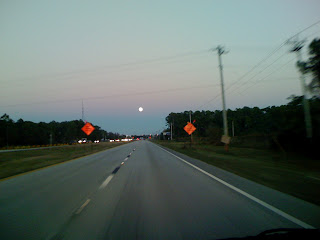 No, I didn’t get a ticket. I haven’t even been stopped. It isn’t a fear of getting caught, or what might happen to my insurance rates, or even the example I’m setting for my daughter – who should be getting her driver’s license any month now – or for my son – who hopefully won’t get a license for quite a while.

Nor have I paid much attention to guilt-trips, sermons, or lectures on the evils of speeding.

Nevertheless, I’ve traded in my lead foot for the law-abiding kind. No more “flowing with the traffic.” No more doing the limit+9.

This is a major change for me. Since I began driving, I have consistently gone as fast as I thought prudent. That usually meant that I would “safely” speed, going 5-10 mph over the speed limit, so that law enforcement wouldn’t feel compelled to pull me over. Of course, if I was in the middle of nowhere, that also meant that I would feel safe to go even faster. Or if I was on the highway, I would stay behind the fastest vehicle.

All my thoughts suddenly coalesced into one thing – I can’t speed anymore.

So, for more than a month, I haven’t, and I don’t plan to again.

The current vacation we are on was the big test for me. How would I do driving over 200 miles on the Interstate while under pressure to arrive as quickly as possible?

It was good. It took longer, but there was much less stress. I feel as though I am honoring Christ in this way. And I’ve also noticed how fast 99% of the drivers go. I try to keep out of their way.

(However – as you can see from the picture – I still take an occasional picture while driving.)